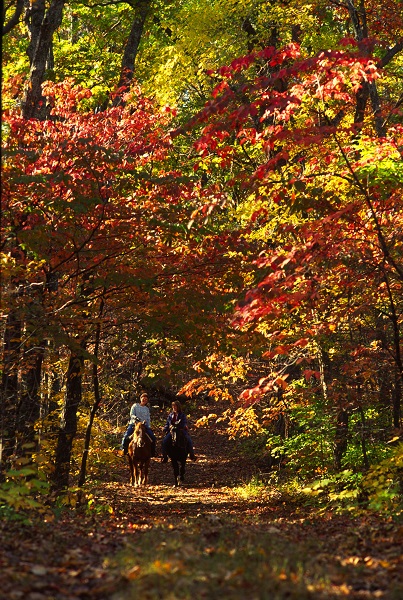 Dr. Edmund A. Babler Memorial State Park near St. Louis has a 6-mile trail that takes riders by the historic stables, an outstanding example of the beautiful stonework done by the Civilian Conservation Corps in the 1930s.

Riders are welcome at Sam A. Baker State Park on portions of the Mudlick Trail, which goes through the St. Francois Mountains, one of the oldest mountain regions in North America. The trail goes from Big Creek Valley to the top of Mudlick Mountain.

Castlewood State Park has two equestrian trails: the popular Chubb Trail, with connections to two St. Louis County parks, and the Grotpeter Trail, which heads uphill to the top of a long ridge.

Riders can enjoy some of the state park system’s most spectacular scenery on the 10-mile Goggins Mountain Equestrian Trail at Johnson’s Shut-Ins State Park. The trail passes through a 5,000-acre wild area with several rocky creek crossings

Horses are permitted on the section of Katy Trail State Park between the State Fairgrounds at Sedalia and Clinton and from Portland to Tebbetts, as well as the 47.5 miles of the Rock Island Spur. Knob Noster State Park has an equestrian trail system, and 12.75 miles of the Lake Wappapello Trail is open to horses.

Lake of the Ozarks State Park has three horseback-riding trails, including the 13.5-mile Trail of Four Winds, which crosses almost every kind of natural community in the park.

Another long ride that passes through remote, wild areas is the 10-mile-long Peewah Trail at Trail of Tears State Park.