Missouri, long known as the “Cave State,” has almost 6,400 caves, and Missouri State Parks showcases four of the best for public tours.

Many of the wild caves used by bats in the state park system are temporarily closed to help prevent the spread of a fungus that harms bats but does not affect humans. Some exceptions are made for educational tours and other low-risk groups in specific wild caves. Contact the parks if you are interested in taking a school group through a state park cave.

The four caves are open for tours from April through October and closed during the winter when bats use them for hibernation. When you visit these four tour caves, you can help reduce the risk of spreading the fungus to bats by not wearing any clothing, footwear, accessories or equipment that has been in any other cave.

Onondaga Cave is one of America’s most spectacular, with 1.5 miles of passages decorated with fantastical deposits like the Twins, the King’s Canopy, the Rock of Ages, the Big Room and the delicate Lily Pad Room. 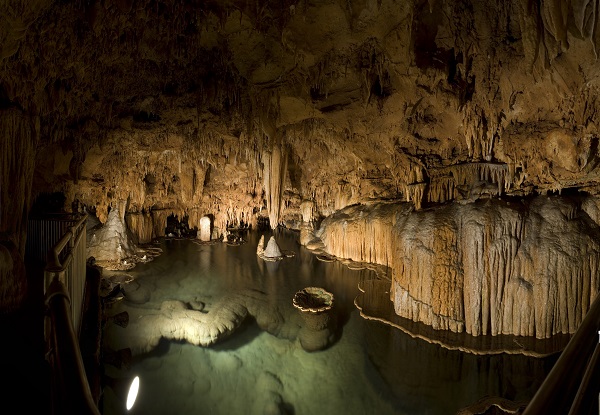 Onondaga also is one of the most accessible of the caves. Tours follow a paved walkway with a stainless steel railing, and electric lights are switched off and on to illuminate the way.

The three other caves give visitors electric lanterns during tours to lessen the disturbance on the cave creatures. While bats are the most readily seen of the residents, Onondaga has 68 known species, from tiny invertebrates to grotto salamanders.

Although the four caves were formed the same way, with mildly acidic rainwater eating away porous bedrock, each has its individual displays of pencil-thin soda straws, flowing drapery and giant columns were stalactites and stalagmites meet.

The most memorable feature at Ozark Caverns is Angel’s Shower, a continuous flow of water from a “showerhead” of stalactites to a crystalline basin 8 feet below.