In 1897, the all-Black 25th Infantry Regiment Bicycle Corps embarked on an epic bicycle ride of more than 1,900 miles from Fort Missoula, Montana, to St. Louis, Missouri, as part of an experiment by the U.S. Army to determine the effectiveness of moving troops by bicycle. Called “The Great Experiment” in national newspapers, the journey took 41 days to complete. The route for the experiment closely followed the Northern Pacific and Burlington railroads through Montana, Wyoming, South Dakota, Nebraska and Missouri, and was chosen specifically to experience as many different conditions, climates and landscape formations as possible.

The 25th Infantry was one of six racially segregated units formed by the Army after the Civil War. Soldiers in these units were required to continuously prove themselves to their white counterparts because of the perception that Black soldiers were inferior in courage and ability. Members of the Bicycle Corps demonstrated the opposite was true. Nicknamed the Iron Riders because of the heavy one-speed bicycles they pedaled and for their iron-hard constitutions, the soldiers endured conditions along the route that would have daunted even the most avid of modern-day cyclists: severe weather events, extreme heat, food and water shortages, illness from alkali poisoning, and racism and hostility from local residents. Despite these challenges, the Iron Riders successfully reached their final destination in St. Louis on July 24 and were welcomed by a crowd of 1,000 cyclists who escorted them into Forest Park. 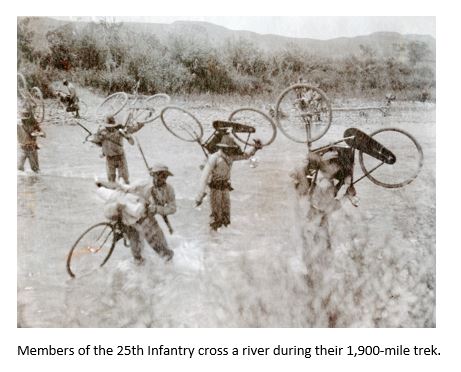 Of the 23 men who embarked on the 1897 journey from Fort Missoula to St. Louis, 20 were enlisted Black soldiers (Buffalo Soldiers) who had volunteered for the trek. Three white men were also part of the expedition: 2nd Lt. James Moss, the 25th Infantry's commanding officer and a bicycling enthusiast; Dr. James Kennedy, an Army physician; and Edward Boos, a young newspaper reporter and fellow bicycling devotee. The enlisted men who were chosen for the ride ranged in age from 24 to 39, and all were in top physical condition. Five of the enlisted soldiers were veterans of previous, shorter bicycle trials, but some had never ridden bikes before. Because of the unique nature of the expedition, Army regulations required that each cyclist weigh no more than 140 pounds and be no taller than 5 feet, 8 inches. Moss had to receive special permission to allow participation by the handful of soldiers who exceeded these requirements. Below are the names and rank of the men who took part in the ride.

The Bicycle and Gear 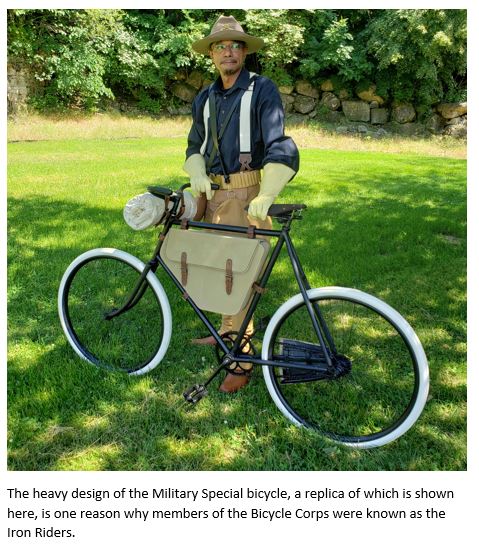 In order for the members of the 25th Infantry Bicycle Corps to be successful on their 1,900-mile journey, they needed bicycles that could withstand the variable terrain through which they would ride. A.G. Spalding & Bros., which would eventually become the major manufacturer of sporting goods known as Spalding, agreed to donate specially designed bicycles for the riders. The Military Special, as it was known, had a sturdier front fork that absorbed the bumps of the rough roads; an ergonomically designed seat, the Christy saddle, for comfort on long rides; protective coverings for the chains to prevent damage from dust, mud and rocks; diamond-shaped frame cases that fit in the space between the top, seat and down tubes; and metal tire rims.

With these modifications, the steel-frame bikes were very heavy, weighing 32 pounds. Fully loaded with each rider’s gear, the average weight of the packed bicycles was 60 pounds. In a report to the adjutant general, Moss stated that, “Every soldier carried one blanket, one shelter-tent half and poles, one yard mosquito netting, one bicycle wiping cloth, one handkerchief, one pair drawers, one undershirt, two pair socks, one knife, fork, spoon, cup, tin plate, toilet paper, tooth brush and powder. Every other man carried one towel and one cake soap.” The diamond-shaped frame cases carried each soldier’s rations, which included salt, pepper, baking powder, flour, dry beans, ground coffee, sugar, bacon, hard bread, canned beef and baked beans. When in camp, the frame cases could be taken apart and used as frying and baking pans. Each soldier also carried a 10-pound rifle and wore a cartridge belt with 50 rounds of ammunition.

Each of the five states through which the soldiers rode – Montana, Wyoming, South Dakota, Nebraska and Missouri – presented its own unique set of challenges. In Montana, heavy rain at the beginning of the trek turned the road to muddy “gumbo,” making it so impassable that the soldiers chose instead to ride on the Northern Pacific Railroad tracks, having to endure endless jarring from riding over the ties. At the Continental Divide, blowing sleet and snow reduced forward visibility to less than 20 feet, and the freezing temperatures forced the cyclists to make frequent stops to warm their hands and ears. In both Montana and Wyoming, the soldiers were forced to wade through the Little Big Horn River multiple times, carrying their bikes on their shoulders. Moss reported that the journey through northeastern Wyoming and southeastern South Dakota “was very dreary – the landscape was a monotonous series of hills, with now and then an alkali flat, while the water was abominable.” Boos reported riding over “a great prickly pear prairie,” although no one sustained a tire puncture. In Nebraska, the corps experienced sandy roads, some where the sand was so deep that the riders were forced to dismount and push their bicycles along and, in some places, ride the railroad tracks again. The riders also suffered the ill effects from drinking alkali water, as well as the excessive July heat. 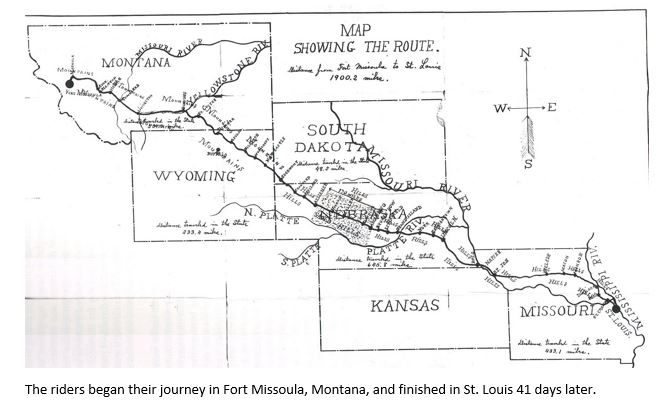 On July 16, 1897, the cyclists were ferried across the Missouri River at Rulo, Nebraska, and made their way into Missouri. Although Missouri was the last leg of their journey, it continued to be an arduous trip. An article in the Kansas City Journal reported: “The roads across Missouri were bad and hilly and with the exception of a few gravel roads, were the worst on the entire trip. When away from the railroad the people were inhospitable. In one instance water sufficient for cooking being refused, and no reliable information regarding the roads could be gained. The heat for the last three days of the trip was severe and hard on the men.”

Locations in Missouri where the riders camped included Napier (near present-day Big Lake State Park), St. Joseph, Hamilton, Laclede, Macon, a location near Monroe City, Louisiana, and a location near St. Peters. Local newspapers reported the passage of the soldiers. The Farmers Advocate in Hamilton recounted the following: “Somewhat of a stir was created Sunday afternoon in town when a detachment of the United States regular army came through on bicycles. United States regulars seldom visit Hamilton and a sight of a number of them fully armed and equipped would have been sufficient in itself to cause a commotion. To see them mounted on wheels was, however, an unusually strange sight.” An article in the St. Louis Star mentioned, “The best riding on the trip was from Louisiana to Eolia in Pike County.” There was a historical reason for this. According to a 1902 article in Good Roads magazine, Pike County had some of the best and well-maintained toll roads in Missouri at that time. The revenue from the tolls enabled the county to keep the roads in better repair than country roads elsewhere.

Moss recounted that on the last day of their ride, the riders had to endure a heavy rainstorm, broiling heat, thick river-bottom mud and a rough railroad track before reaching their final destination, St. Louis, at 5:30 p.m. July 24, 1897, “… and thus it came to pass that the Twenty-fifth United States Infantry Bicycle Corps made the greatest march known of in military history.” As the soldiers rode into St. Louis, newspapers reported that they were welcomed by a crowd of 1,000 cyclists and a squad of mounted police, who escorted them through a mass of cheering spectators into Forest Park. An article in the St. Louis Post-Dispatch on July 25, 1897, summarized the Great Experiment with these words: “The ride of Lieut. Moss and his men is a feat of world-wide interest. Military cycling has been the rage in Germany and France, but nothing approaching this 2,200-mile [sic] journey has been accomplished.” 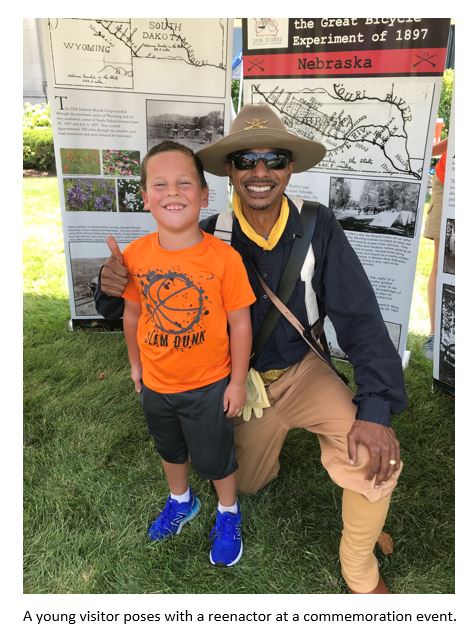 The year 2022 marks the 125th anniversary of the 25th Infantry Regiment Bicycle Corps’ incredible journey. To commemorate the anniversary, Missouri State Parks partnered with Lincoln University of Missouri, the Greater Los Angeles Area Chapter of the 9th and 10th Horse Cavalry Association, and the Missouri Parks Association to host a series of events that told the little-known story of these soldiers and their extraordinary accomplishments. The locations of these events followed the historic route the soldiers rode through northern Missouri, and included:

Each of these locations featured Buffalo Soldier reenactors, exhibits about the soldiers and their route, a replica of the bicycle the solders rode, activities for kids, period music, food, and a chance to visit with Erick Cedeño, the “Bicycle Nomad,” as he reenacted the 1,900-mile ride.

Missouri State Parks is partnering with the Bruce R. Watkins Cultural Heritage Center to host an event in Kansas City to commemorate the Iron Riders and their historic ride. This event will take place from noon to 4 p.m. on Saturday, Oct. 8, at the Bruce R. Watkins Cultural Heritage Center, 3700 Dr. Martin Luther King Jr. Blvd., Kansas City, Missouri. Activities will include food trucks, entertainment, programs and presentations, booths from local businesses and community organizations, kids bike helmet giveaways, exhibits about the soldiers and the ride, as well as a model bike and replica uniform of the soldiers. The exhibits, model bike and replica uniform will be on display at the center until Oct. 31.

Nathan and Olive Boone Homestead State Historic Site will also be hosting an Iron Riders event from 11 a.m. to 3 p.m. on Saturday, Nov. 5. Activities will take place at the picnic shelter at the site and will include an encampment reenactment, booths from local community organizations, exhibits about the soldiers and the ride, as well as a model bike and replica uniform of the soldiers. 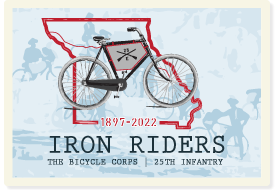