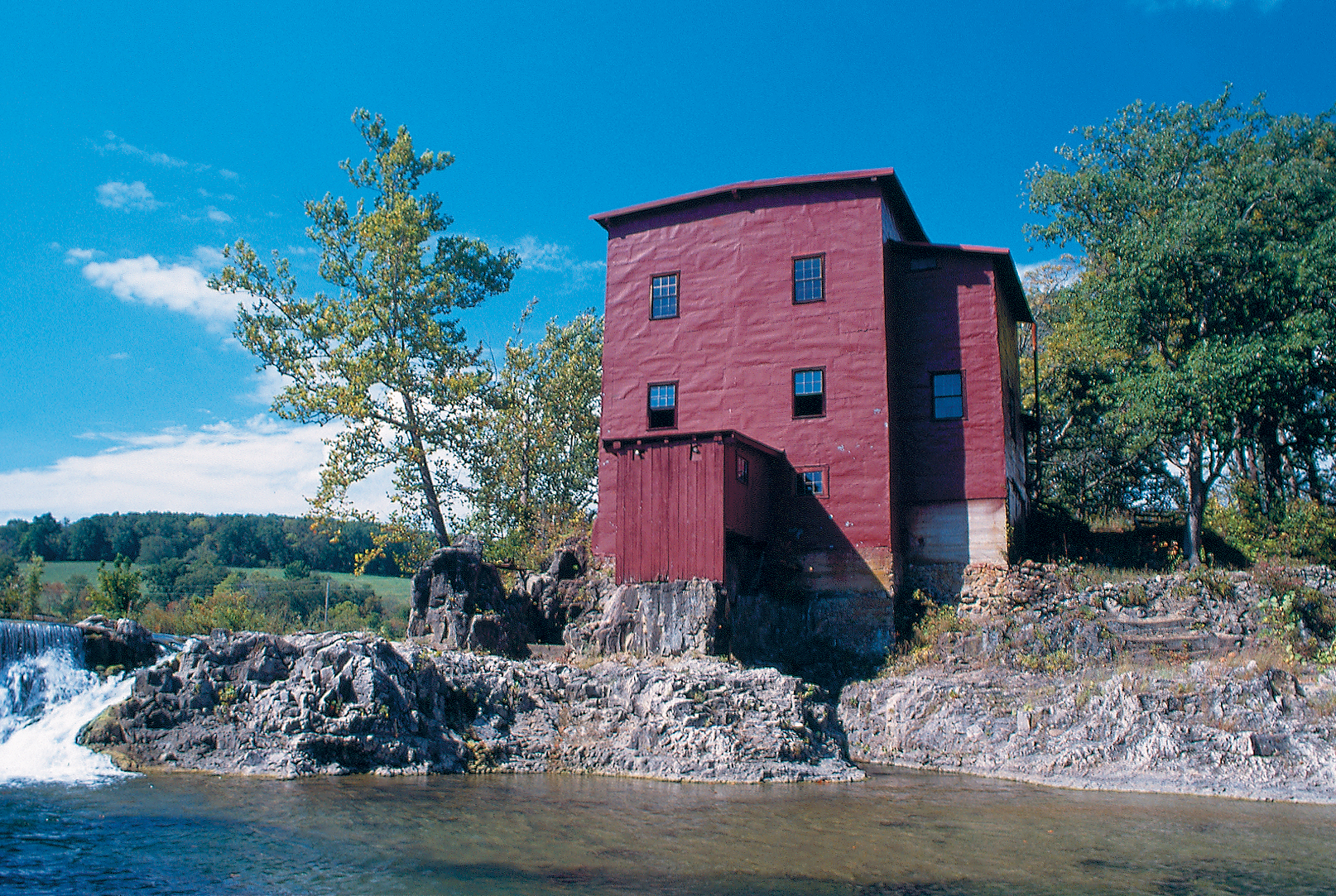 Dillard Mill is one of Missouri's best-preserved examples of a water-powered gristmill. Sitting along the clear-flowing Ozark stream, Huzzah Creek, the red mill is nestled among trees and near water cascading over a rock dam, creating a picturesque setting.

Dillard Mill is the second mill structure at this site. Wisdom's Mill, the first mill built here, was constructed in the 1850s. A rock wall along Huzzah Creek was blasted open allowing the increased water flow to the mill needed for its operation. As a result, the creek changed its channel.

Joseph Dillard Cottrell and his brother, James, later owned Wisdom's Mill from 1881 to 1889 - years that brought many changes to the area. During the Cottrells' ownership of the mill, the small community grew with the establishment of a post office in 1887. It was also during this time that the community was named Dillard after Joseph Dillard Cottrell.

In 1889, the Cottrells sold the mill to Andrew Jackson Mincher. The mill burned in 1895 during Mincher's ownership. Emil Mischke, an emigrant from present day Poland, purchased the mill property in 1900 and began construction of the present mill four years later.

Using some of the hand-hewn timbers salvaged from Wisdom's Mill, Mischke built a 30-by-40-foot structure. Following plans developed by the Cornelius Mill Furnishing Co. of St. Louis for the interior of his mill, he installed steel roller mills instead of the more common buhr stones for grinding the wheat into flour. Another innovation he introduced was a turbine to power the mill. The new, modernized mill was completed in 1908.

Mischke's sister, Mary, became a partner in the milling enterprise in February 1907, and they both worked hard to make the mill a success. Farmers from the surrounding hills and valleys came to have their grain ground at the mill. In 1917, Mary sold her portion of the mill back to her brother, and he remained the sole proprietor of the mill for several years.

A decade later, the 66-year-old Mischke decided to send for a mail-order bride. His new bride, however, found it difficult to adjust to life in the rugged Ozarks and after only a few years persuaded Mischke to sell the mill and move to California.

Lester Klemme became the new mill owner in 1930. In addition to milling livestock feed and flour, he decided to take advantage of the rustic Ozark landscape by starting Klemme's Old Mill Lodge. A guest could spend the night in one of the cabins Klemme built, fish or swim in the millpond, and eat at the Klemme table for only $7 a day.

Klemme's age and a shift in the local economy from farming to mining brought about the shutdown of the mill in 1956. He continued to operate the lodge until the 1960s. In 1974, the L-A-D Foundation of St. Louis, a nonprofit organization, bought the property. In 1975, the foundation leased the mill and surrounding property to the Missouri Department of Natural Resources to operate as a state historic site. Also on the property is a building that once housed a general store owned by Adam Wilhite.

Today, the restored mill contains most of its original machinery. Two of the three steel roller mills, however, were donated for scrap metal during World War II. In 2005, the historic site acquired two roller mills similar to the ones that had been removed. Therefore, the site now has three roller mills working for the first time since the WWII era! Visitors can see the remaining machinery come to life during a tour of the mill. With the turn of a wheel, the mill begins to operate as it did years ago, grinding grain into flour. The sound of the water gushing over the dam outside the mill is replaced with the sounds of the belts and rollers turning. Tours of the mill are given year-round, although days and times vary by season. Groups should make advance reservations by contacting the site office.

Visitors can hike a trail that winds through the hillside amid oak-hickory forest and a plateau of pines. Benches along the trail allow visitors to catch their breath or just sit and enjoy the sights and sounds of nature. Deer, turkey or beaver may be spotted along the trail or creeks. Picnic sites provide a shady place to sit and enjoy a picnic lunch. One of the picnic areas provides the perfect location to snap a picture of the mill's beautiful, rustic setting.