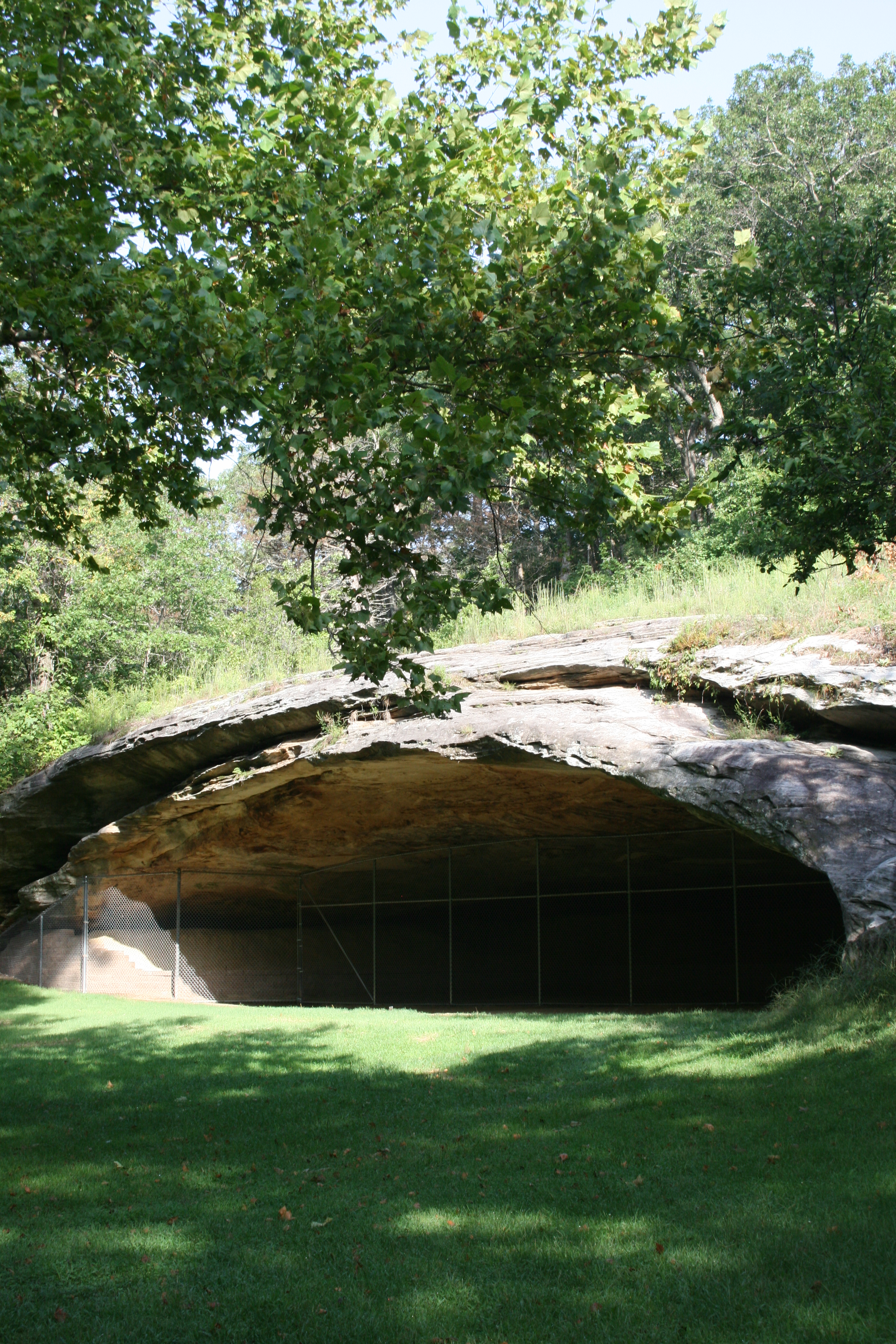 Nestled in the hills above the Loutre River in Montgomery County, Graham Cave State Park provides opportunities for both recreation and education.

The main feature of the park, Graham Cave, was formed at the point of contact between Jefferson City dolomite and St. Peter sandstone. Gradual water flowing through the sandstone, along with a combined action of wind and freezing, worked to make a relatively large cave. The cave originally extended about 100 feet into the hill, but an accumulation of debris over the years filled the lower part of the cave with about 7 feet of deposits. An archlike entrance, 120 feet wide and 16 feet high, provided humans and animals with easy access to shelter.

Graham Cave is named after the first settler who owned the cave property. In 1816, Robert Graham bought some bottomland along the Loutre River from Daniel Boone's son, Daniel Morgan Boone, and in 1847, purchased the property that housed the cave. It remained in the Graham family until its transfer to the state in 1964.

Graham's son, D.F. Graham, used the cave to shelter farm animals, but also became interested in archaeology and artifacts that he found in the cave. After his death, his son Benjamin offered his father's collection of artifacts to the University of Missouri, which spawned archaeological interest in professors Jesse Wrench and J. Brewton Berry. Wrench and Berry visited the cave to assess its archaeological potential in 1930.

Benjamin's daughter, Frances, married Ward Darnell, who, in 1948, began to enlarge the shelter for his livestock. Archaeologists heard of Darnell's activity and persuaded him to stop until they could conduct salvage excavations.

Between 1949 and 1955, the University of Missouri and the Missouri Archaeological Society conducted extensive excavations in the cave with astonishing results. Artifacts found in Graham Cave, associated with charcoal dated by the radiocarbon method, provided important evidence about humanity's adaptation to the environment at the end of the ice age. Archaeological findings revealed different periods in humans' use of the cave, dating back to as early as 10,000 years ago.

Archaeologists uncovered artifacts that provided clues to the lifestyle of the ancient Dalton and Archaic period. Artifacts from the undisturbed levels in the cave dated from the time when the Paleo-Indians were first adapting to changes created by the retreat of the glaciers and the emergence of a new environment, which was much like the one we see today. The materials that they left behind are largely the result of getting food. They depended mainly on hunting and fishing for food, using spears as weapons, and occupied the cave seasonally. Other featurs in the cave deposits tell about ceremonies and small aspects of daily life. Pieces of pottery found in the cave indicate that it was also occupied by a more recent culture of American Indians.

As a result of these important archaeological findings, in 1961 Graham Cave was the first archaeological site in the United States to be designated a National Historic Landmark. It was also placed in the National Register of Historic Places in 1966. Frances Graham Darnell donated the cave and land to the state in 1964 to create a state park. After acquisition of the cave by the state park system, excavations were done in 1966 to clean up the area and provide additional research. Since then, excavations have not been conducted, in order to preserve the remaining deposits. Today, trails lead to the entrance of the cave.

Surrounding the cave is naturally diverse land. The park is a combination of moist bottomland forests, rocky oak-hickory forest and glades. Graham Cave Glades Natural Area is an 82-acre tract made up of sandstone and dolomite glades that support a rich diversity of characteristic glade species. Several hiking trails wind through the park, allowing visitors to enjoy an up-close look at the park's natural features. In addition to interpretive panels throughout the park, there are displays in an interpretive shelter on Graham Cave Trail and in the park office/visitor center, featuring the natural and cultural resources of the park.

Scattered picnic sites, an open picnic shelter and playground equipment make Graham Cave State Park an ideal family retreat. For overnight guests, basic and improved campsites are nestled in a wooded area of the park. The camping area provides a dumping station, a modern restroom and hot showers. A boat ramp on the Loutre River offers access for boating and fishing.