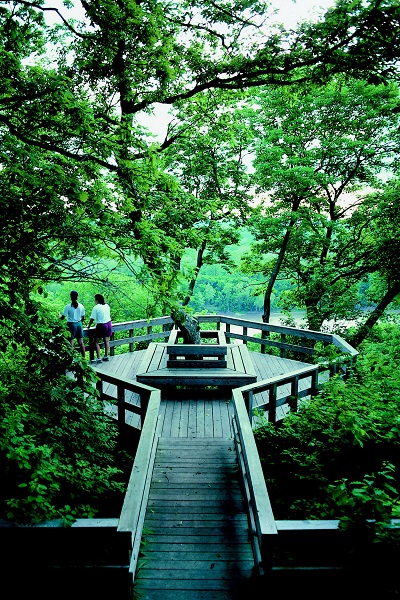 The Missouri River has helped shape the land and culture around Weston Bend State Park. What once was a thriving tobacco growing and trade area now serves the public as a reminder of the impact and influence the Missouri River had on its bordering towns.

The proximity of the Missouri River and the area’s rich soil attracted many Indian tribes including Kansa, Iowa, Sac and Fox. Lewis and Clark, on their expedition to explore new territory, reached the Weston vicinity on July 2, 1804. In their journal, they recorded evidence of an old Kansa village on the opposite side of the river. On their return trip two years later, they encountered fur traders traveling up the Missouri River.

Between 1832 and 1838, a French Canadian named Pensineau operated a tavern and trading post to serve the area’s soldiers and Indians within what is now part of Weston Bend State Park. The U.S. government later made this area part of its military reserve to stop the tavern from selling liquor to the soldiers. A creek in the park still bears Pensineau’s name.

The early success of the town was based on the tobacco growing and the river port. By 1842, Weston had 37 businesses and for the next 20 years continued to grow by exporting large quantities of tobacco and hemp. By 1858, Weston was recognized as the largest hemp port in the world and continued to be a major transportation link on both land and water. The McCormick Distillery began operation in 1858 just east of Weston and claims to be the oldest continuously operating distillery in the United States.

In the late 1800s, Weston began to decline following the Civil War and several major fires that destroyed much of the town. A major shift in the course of the river in 1858 eventually destroyed the port at Weston and contributed to the decline.

Today, agriculture, including tobacco production, still plays an important role in the area’s economy. Approximately 7 million pounds of tobacco are sold in Platte County each year. Five tobacco barns located within the boundaries of Weston Bend State Park serve as a reminder of the thriving industry in this river community. In front of one of the barns is an interpretive display telling the history of the area tobacco production and trade. Another tobacco barn has been converted into an enclosed shelter, which can be reserved by contacting the park office. 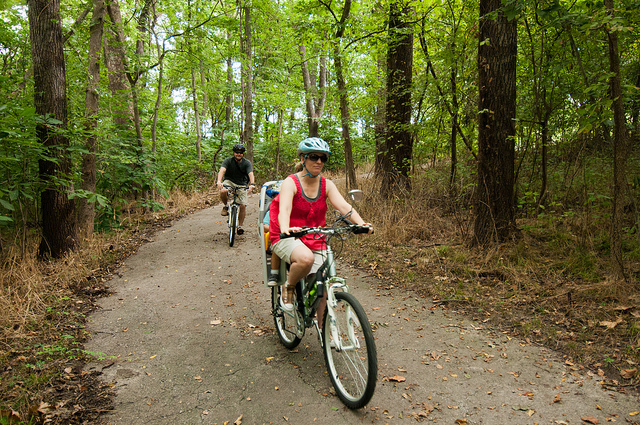 The park features a scenic overlook that is accessible to people with disabilities. From it visitors can see one of the most expansive views of the Missouri River in the state, the wild bottomland forests of Fort Leavenworth and 6 to 8 miles into Kansas. A trail that meanders through the woods and along the edge of the bluff offers scenic views of the river similar to what Lewis and Clark saw on their expedition in 1804. Because the park is located along the forested river corridor, it offers excellent bird watching, especially during spring and fall migrations.

Recreation opportunities in the park include Paved Trail. Hikers and bicyclists will enjoy the peaceful setting of the trail as it follows a creek through forests of cottonwood, sycamore and maple trees, and then returns along the sunny ridge tops. Take along a picnic lunch to enjoy in one of the secluded picnic areas. A playground and open shelter, available for reservation, make Weston Bend State Park an ideal place for family get-togethers.

Visitors wanting to stay overnight can choose from both basic and electric campsites. Several of the sites located on the ridge top offer scenic views of the surrounding countryside. Campground amenities include modern restrooms, hot showers and laundry facilities.